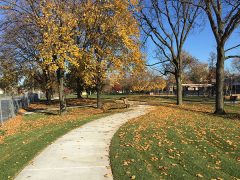 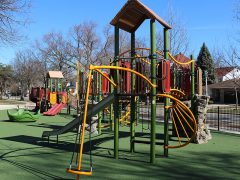 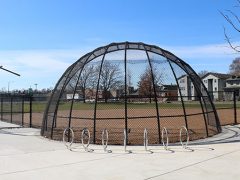 Acquired in 1921, the linear park was formerly railroad property. It was originally called Park #6 or Perennial Gardens for the formal plantings installed there, but was later renamed for the adjacent Maple Street.

A site master plan was completed in November 2007 for Maple Park. Phase I of the master plan improvements, starting in the summer 2010 and finishing in spring 2011, included relocation of the three tennis courts in the center of the park to the park’s southwest corner to make way for a central meadow area, new walkways, lighting and landscaping. A dog park was added to the northwest corner of the park.

In 2017, all walkways were connected to provide walking paths around all four meadows.Tennis courts were lined for pickleball play and the comfort station was renovated. Additionally, a new playground was installed

featuring a variety of equipment for all ages with an adjacent picnic shelter. The two ball fields were renovated including the spectator and player areas. Climbing boulders were added in between the ball fields. These improvements were funded by an Illinois Department of Natural Resources $400,000 grant and funds from the Park District’s Capital Improvement Plan.